From Starbucks to Starbucks: one traveller's account in a globalising world

“Sometimes he fought for his native country, sometimes against it” - Jorge Luis Borges, A biography of Tadeo Isidoro Cruz 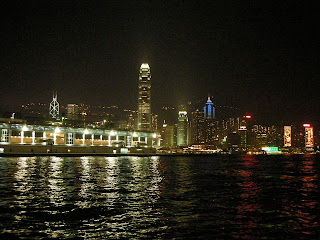 Barely slept in the night. Barely – perhaps half an hour somewhere. I remember a dream with a small shark upside down in a bucket. It was still alive somehow, even though the water formed only a thin layer at the bottom of the bowl.

Since we cannot sleep we get up early, and have breakfast in the hotel. An English breakfast for the first time in days ... I can't help being satisfied.

We get out and walk around, first going to a traditional market across the road. Java Road Market, just in North Point. The top floor is a veg and fruiterers market, the bottom level is full of live (and dead) fish and stock. I see chickens in cages, eels in water-filled crates, a woman who shyly refuses a picture. I suddenly feel like a trespasser.

In an abstract world that resembles London two people are making their way into a train. The man looks relaxed, confident, his tie is slightly loosened. Three fashionable and pretty girls to his right, copied from an MTV for Boss Blinded Mice. The second person ... looks like the Queen. I ask her for the way to Piccadilly or anyone with a foreign accent. She looks at me funny. “Are you thinking of a comeback darling?”, I say, “because I just asked you a simple question.” But of course I say it in broken Mandarin and it sounds fragile and complicated like those intricate square Chinese characters I cannot yet write and the coach retains its silence as I make my way to the A-Z puzzle of London, condensing my anger into an active search. 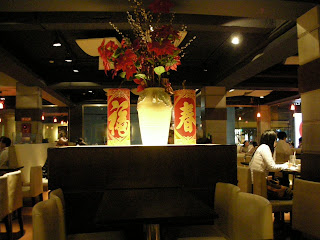 Although I have seen few Westerners, nearly every public notice has an accompanying English description. I assume that Taiwan is readying itself for globalisation, even though the reality does not yet meet that expectation.

So far, people in service places understand me. For instance I am having a light lunch in Ikari Coffee (a Taiwanese designed cafe with a uniquely metropolitan and rather Western feel – a second generation Starbucks) – very good coffee and a great snack – and the girl at the counter spoke in English to me. We didn't exchange anything sophisticated, but she had no problems with the simple phrases I threw at her:
“Can I have this one?”
“I come downstairs?”

And she answered appropriately to the point:
“Latte?”
“When the light goes on ...”
“Yes.”

I look at photographs and think “perhaps the memories of times lived intensely are more real than the life I lead in the present”. Familiar faces stare at me, faces I am already getting to know better in two dimensions than I ever did in real life. I look endlessly at the images of places I may never see again.

A craving for coffee stimulates my brain and I take a train and enter the city randomly. 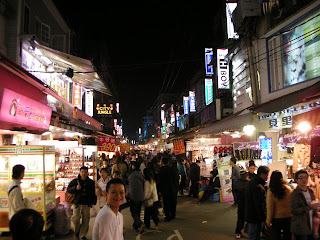 I learn how to point at things and say: “this one” “that one”
I amuse my audiences with correctly pronounced renditions of “zhege” “nage” and “wo xiang yao mai kafei”

Somewhere on the main road I manage an entirely non-English conversation with a local.
“bu hao yi se, qingwen, Gugong, yao ze ma qu?” and I get the corresponding descriptive reply. He speaks no English whatsoever. While he responds he must be noticing my puzzled expression because he points to the traffic lights, raising three fingers: three traffic lights on, turn to the left! I feel a rising sense of achievement. Am I gradually passing through the linguistic and cultural looking-glass?

But somehow I never reach my destination: other conversations, other delays, not the fault of the directions given to me. Maybe travelling is also a circle.

Lost in the labyrinth I find my first beacon: Caffe Nero in Piccadilly - the window to all worlds. I survey my surroundings, in the meantime absorbed by the gravity of this phrase. “But not every world sees every other world”, I ponder philosophically as I observe a group of antipodeans loudly proclaiming their identity without even the slightest hint of irony or invitation.

My companion complains about the service. Then about the coffee. I move my pen and attempt to write a haiku. It's too long. Then it becomes something else altogether as I realise I'd rather
plunge my penis 17 times into
my companion than become so
culturally neutered on the page.

I touch my companion's thigh, and the lush vanilla skin on her hip, and she lets me.
Posted by thundercomb at 10:42 pm No comments:

Thanks go to Paco for his unfailing advice and tireless help throughout my stay. He is pioneering the spirit of flamenco in Taiwan, and his studio is going from strength to strength!

Here are images of a few noteworthy impressions. 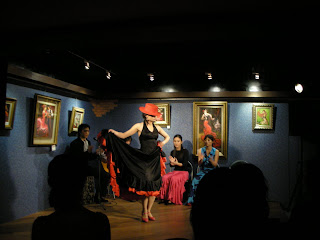 A performer in action at the studio.

The studio has both a professional and an authentically Spanish atmosphere. 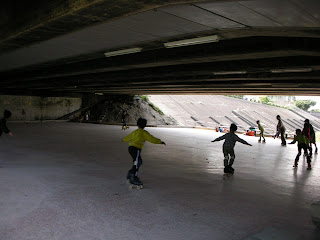 Skating under the bridge

Due to a lack of space in Taipei, public spaces are fully utilised. This area under a bridge is used for skating. On the opposite side (not shown) the same area is used for dancing. 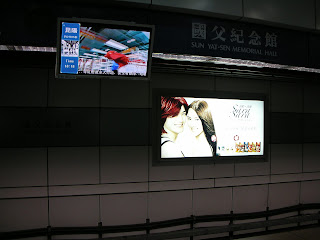 Flat screens at the metro

Flat screens adorn the walls of metro stations, and passengers waiting for the train to arrive have the opportunity to watch ads on the far wall, or trailers and changing ads on the smaller screen nearby. Static advertising, good-bye! Of course, some Londoners may prefer to see the Da Vinci Code scrolled at a readable speed across the screen ... But perhaps another, shorter graphic literary form could be invented for this recurring non-space. 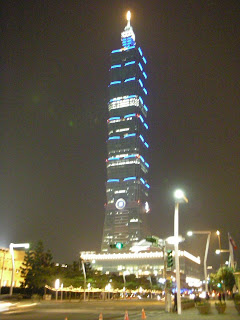 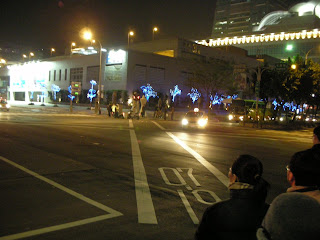 Thank god for diagonal crossings ... now why didn't we think of that? Not to mention the large red counter accompanying the little green man at every traffic light, telling you how may seconds are left to cross - very useful!! 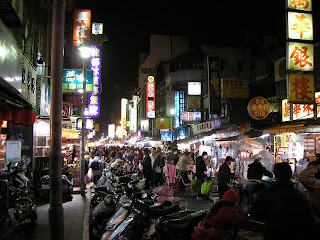 Night markets: A kind of night life.
Posted by thundercomb at 10:40 pm No comments:

Thanks to Yu-Chen for showing me Taichung and the Taoist mysteries of Lukang!

"During the Qing Dynasty, the depth of Lukang's harbour and its proximity to Fujian province on mainland China made Lukang an important trading port. During Lukang's heyday from 1785 to 1845, Lukang's population reached 200,000. Lukang was Taiwan's second largest city after current Tainan and was larger than Bangka (now a district of Taipei), then the island's third-largest city." - Wikipedia 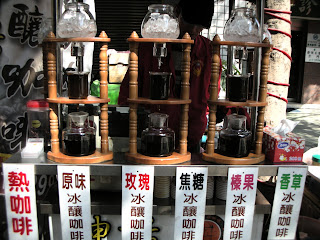 Coffee for sale in Lukang 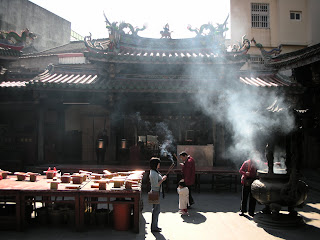 Prayers at the famous Matzu temple in Lukang 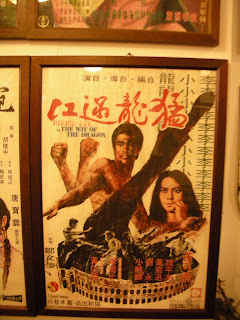 The original poster of an iconic film?

Observed in a Taiwanese style retro cafe in Lukang, this poster of Bruce Lee's The Way of the Dragon caught my eye. Sadly, the flash was too bright and this is the only other photo I took.
Posted by thundercomb at 10:39 pm No comments:

According to Wikipedia, Kaohsiung is one of the world's four largest ports. It is also Taiwan's second largest city, after Taipei. Heavily polluted, it is not uncommon to see people wearing face masks. And the density of scooters per square meter of tar probably exceeds that of Taipei! 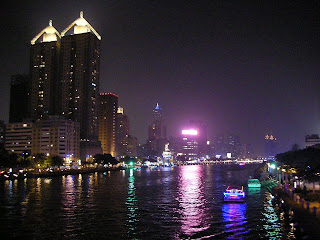 Night view of the city across Love River. 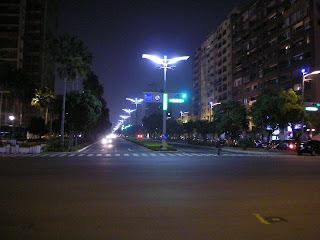 Street lamps have a seagull design. It's a seaside city, after all ... 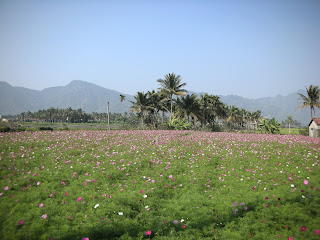 A view of the countryside, outside Kaohsiung 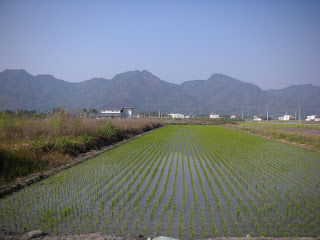 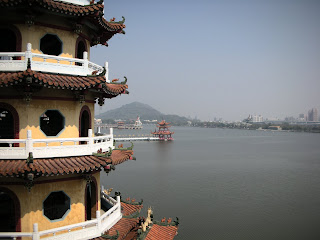 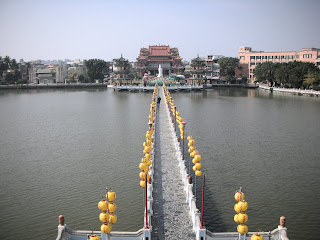 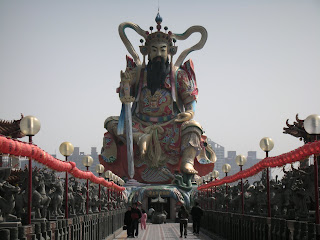