The Subject in Spinoza and Hegel

In Adrian Johnston’s eminently readable Adventures in Transcendental Materialism he critiques various thinkers whose reliance on Spinozist thinking, he contends, renders their epistemological and ontological grounds vulnerable. The main arrow of critique in his philosophical quiver is Hegel’s systematic subversion and dismantling of Spinoza’s all-singing, all-dancing, all-encompassing Substance. He also invokes Lacan and Žižek along the way, but on the whole we are clearly in the territory of a two hundred year old battleground where Hegel, like a nimble martial artist, uses Spinoza’s own momentum against him and so diverts his progress.

The fact that Spinozism continues to live on in various recent and current figures such as Althusser, Deleuze, and Malabou to name but a few, suggests that Hegel’s innovation may not be definitively superseding. Yet to my mind, Johnston’s portrayal certainly exemplifies the strength of the Hegelian dialectic as a philosophical concept, and also serves as a warning that any Spinozist appeal to a totalising substance would have to be carefully qualified and contextualised.

The current renewal of that battle is not my concern in this post. Instead, I would like to focus on clarifying Hegel’s critique, as retold via Johnston. To do so I provide a brief summary in each case, as well as a diagram that could serve as a visual heuristic for the main points of contention between the subject à la Spinoza, and the subject à la Hegel.

Hegel famously described Schelling's Absolute, the progeny of Spinoza's Substance, “the night in which all cows are black”. Spinoza’s Substance is a totality from which follows an extended world of modes and attributes, which provide the monistic Substance with variety. Hegel contends that these attributes are added empirically by Spinoza, and do not add any inherent difference to Substance.

The first critique relates to differentiation. Spinoza’s Substance, according to Hegel, can only be intuited via the mode (intellectual intuition) of an attribute (thinking), for instance as performed by Spinoza himself. However, the problem is that Substance is by its nature undifferentiated, while subjectivity introduces a radical difference, which Johnston describes as the “difference between the being of substance itself and the thinking of this being” (p. 28). 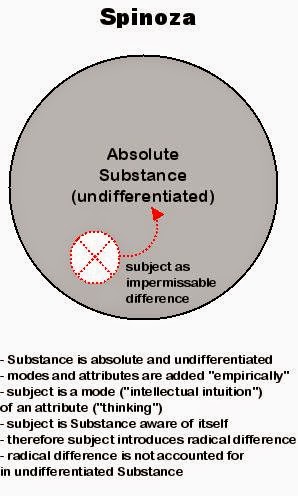 The second critique relates to negation, of which there are two types. In the first type, Hegel is in agreement with Spinoza. Intellectual intuition, as a mode of the attribute of thinking, is determination as a differentiated, individuated identity which is what it is by not being everything else. In other words, it is negation. Hegel calls this principle omnis deter­minatio est negatio (all determination is negation).

Therefore by disallowing it, Hegel (and Johnston) contends that Spinoza’s system is self-subverting. 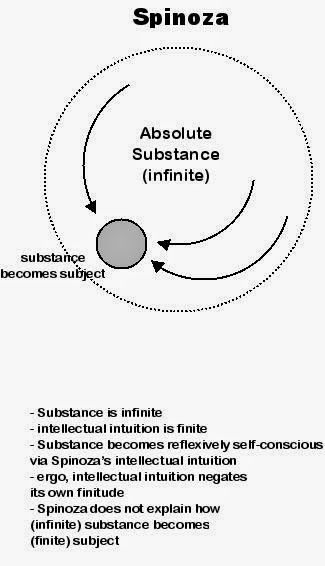 Johnston goes a step further. He observes that “From a Hegelian perspective, Spinoza's greatest breakthrough arguably is his realization of the mutual exclusivity between infinitude and transcendence” (p. 33) (my italics).

Spinoza’s Substance is infinite, or more philosophically, it is universal ontological immanence without exemption. Anything ontologically external to Substance would limit it. All transcendence is therefore excluded. Yet we know that, as per the first critique above, Spinoza's Substance does not permit differentiation, hence it does not permit the rise of immanent self-reflexive intuiting of Substance.

Hegel cheekily contends that Spinoza’s intellectual intuition therefore tacitly, secretly must resort to external reflection in order to intuit Substance. By doing so, even if not admitting it, Spinoza is breaking the rule of universal ontological immanence (infinity) he has set for Substance.

In Hegel's own words:


"But by the determination of substance as indifference, the difference too, comes to be reflected on (Reflexion); whereas with Spinoza, the difference is an external (auberlicher)... difference only by implication (an sich), now it is posited (gesetzt) as such" (Johnston, p. 27) 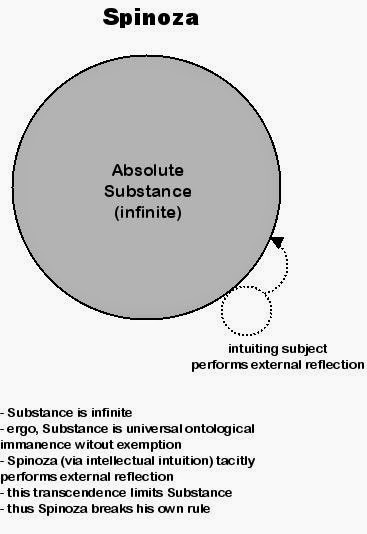 Hegel, of course, provides his own improved version of the subject. His alternative conception of the self-aware subject relies on the Hegelian dialectic.  With reference to Spinoza's disavowal of the double negation (second critique above), Hegel makes explicit what Spinoza could not.

Johnston qualifies this subject further by appealing to post-Hegelian developments. The transcendental subject is a contingent subject (in other words, it is introduced as an “accident”, in the Darwinian sense, as opposed to being teleologically inevitable), which evolves as a dialectical negativity due to irreconcilable structural aspects within the asubjective meta-transcendental substance which is its ontological ground. As such it is immanent to meta-transcendental substance ("matter"), but not reducible to it. 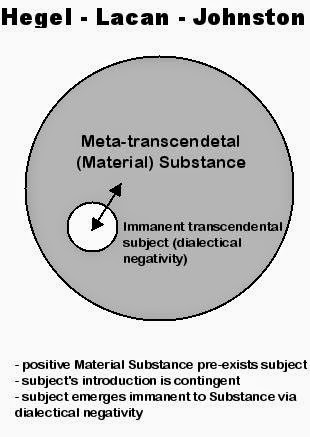 Posted by thundercomb at 6:39 pm No comments: