Little more than the following is known about the last five minutes of Ingo's life. The hangman tied the noose about his head. During this process the crowd started taunting him, with many shouting the slogans of his captors. Then his close friend Hegard, who was also present, began singing the Pater Noster in Latin in a resonating tenor:

At first this served to make the jeers of Ingo's adversaries even louder. Their insults poked at Ingo like verbal knives. But soon the elegance and endurance of Hegard's voice affected their concentration and some turned their attention towards him instead. One, who recognised Hegard as the author of the infamous and influential tract On the Benefits of Free Information, tried to turn this energy to the crowd's advantage by further provoking Ingo, shouting that his friend will die too and he should come and save him. None of this had any visible effect on Ingo, who simply observed the crowd with a critical air.

But for Hegard this proved to be a fatal attitude. Seeing that their attempts only enhanced Ingo's apparent superiority, the populous crowded in on Hegard and beat him aggressively. Ingo still did not say a word. Hegard, suffering many blows to his body and to his head, sank to the ground and eventually stopped moving. Like a fateful twin, Ingo's death was also his.

Hegard's silence seemed to soothe the crowd and the authorities did not intervene. The trapdoor opened soundlessly, and when Ingo's body swung from the stiffened rope, his face still appeared to be smiling at them, quietly mocking their vengefulness.

I too was present among the crowd that day. But unlike many others I preferred to observe rather than to participate. Ingo was serene, unreachable. I was fortunate to be the first to intercept these, Hegard's thoughts, from the internether, because he was expiring fast. Hegard composed them in his final moments, perhaps even imagining Ingo's death in advance. Officially, Hegard died afterwards in a vehicle crash. I've lost all later memories of the event.

Yes, I remember now! I was there too, outside, watching the execution on an electron spread. Ingo looked like a messiah, radiant. They tampered with the light for later transmissions. Have I really kept this image hidden for 156 years? Your body is probably visible somewhere...

Dear friends! This is dangerous and your memories have alerted the Netherin!

These thoughts were detected in the nether at exactly g19jzb. They were successfully captured and frozen in this wave media for forensic purposes. Thought traces were poisoned but the poison trail ended and the sources remain unknown. Seven suspects have been named. Complete information is in the investigation file.

PS: The thoughts contravene the constitutional guidelines for the proper usage of energy particles and are recommended for permanent distortion.

There are still those who debate the problem of "presence" in performance and slide into the seductive solution of a duality of simulation and live performance, as if liveness implies an authenticity or a simulation of a different order than its reproduced form.

It is not for me to demonstrate the similarity between presence and simulated presence. I will stand by the notion that in terms of perception they are nearly equal, bar the emotional enthusiasm we supply to the perception of a live performance, and the possible psychological effect of interaction with a "good" or a "bad" audience that the performer may thrive on or be crushed by.

Instead I am interested in the implication of performance as a simulation. If we accept that film as a medium is merely structurally different (I use the term loosely) from live theater, then surely the following enaction is interesting rather than disruptive or intrusive (real/illusory become false dichotomies):

Suppose a movie is playing in a movie theater, but instead of the actors on-screen the camera occasionally focuses on members of the audience (this location is necessary insofar as the suspension of disbelief must be within easy grasp of a novice to this new form of theater-film). The movie content will be manipulated for this same reason. Perhaps a new horror in which horrible scenes happen in dark music halls and cinema theaters. That is adequate.

In the next instance, actors in the audience act out what is happening on the screen. The audience is expected to know that they are actors once this starts happening.

According to the laws of film, viewers have now looked at representations of their selves presently located on the film. The present has become simulated. (Film mirrors some imagineable part of the simulating mind, and once the mind has been led to believe the action is taking place in the theater itself, their body has become participant to their viewing experience).

Next the screen may become transparent to reveal actors in the background as another audience (this screen can move into the ceiling so that actors move freely but should come back down for the finale explained further down). Then they may act out something altogether incomprehensible, such as a seance in which a candle is placed on a screen and the horrible scene of earlier is played out on another screen behind them.

This act should have a quiet or dark beauty to it. It has to be captivating. (And the film-performance should be cheap - £2 to see.)

Whatever simple plot plays itself out in the meantime is immaterial. Perhaps everything can happen in 15 minutes, from beginning to end.

As a finale the initial scene should be repeated on the top half of the transparent screen that the actor audience will be looking at, facing the real audience, so that both the actor audience and the real audience can see everything on the transparent display. At the same time, the scene can be played again - the murder, the sex in the cinema, whatever it is. It may culminate in a romantic embrace. A curtain falling can be embellished by credits rolling on the curtain itself via whatever projector.

PS: It is, theoretically, enough for me to imagine the countless gestures and rehearsals I observe daily in the theater of life when recurring roles play out the dailogues of the doctor, the lawyer, the housewife, the professional housewife, the novel role, the rebel, the plotter, the silent plotter, the possible terrorist, and all the ensuing confusion and suggestion it leaves me with. Not to mention the countless texts of interpretation running through my head outside the notion of a specified role - the unroled, unscheduled thoughts, etc. The theater of life as a simulation of my memory of life and my expectation of life, and my ability to live (my role to live).
Posted by thundercomb at 12:27 am No comments: 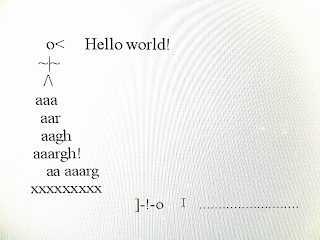 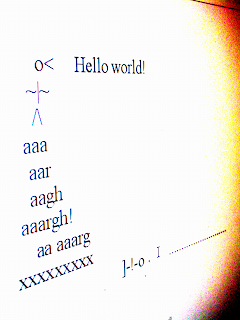 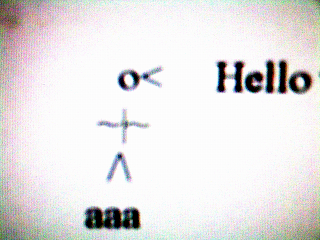 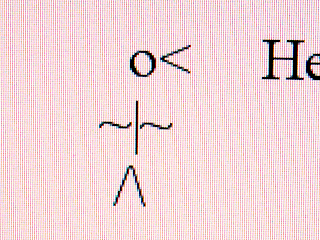 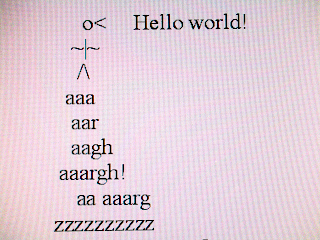 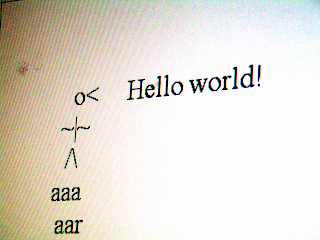 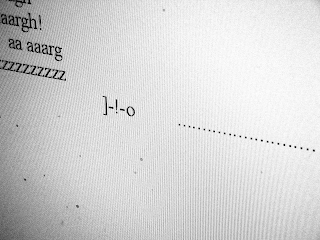 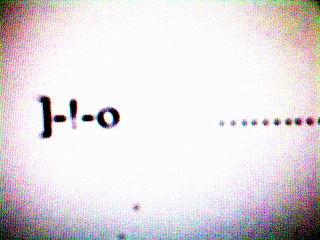 He: What's this
She: Don't know
He: You're not even looking
She: What is it
He: Don't know. It's a bread crumb
She: Can we cook?

He cooks. She cooks. It is impossible not to be overwhelmed by the smell of vinegar that slams into your nostrils like a nervous infant.
Their activity is synchronised like two clocks buzzing their alarms at once.

It is thinkable that they may talk to each other in a language that is not reproducible by these ascii characters, or this printable media, but it is unimaginable that their actions, their sounds, their intentions can have been anything different.

Take hunger for instance, even a dog understands that.

She: The boy is hungry.
He: Why do you have to call him "the boy"? It is human, after all.
She: Don't be annoyed.
He: You are starting to sound just like them.
She: You are annoyed.
He: I am not annoyed.
She: I know. Gosh, I wonder what it would feel like.
He: Yes, and to have sex.
She: The meal is done.
He: I'll dish up and take it. You go and turn yourself off to save energy, I will join you soon.
She: Together in absence. As always.
He: Don't get clever ...
Posted by thundercomb at 9:33 pm 1 comment:

Story of the future

It is the year 2007. A man finds himself busy in the space that is as familiar to him as his home where he lives with his wife and his two children. Unlike his home (which he has nearly fully paid for), he does not own this space and he is not even fully in charge of this space. But there he is, busy as usual, performing the same minute gestures with his hand, straightening his back, tilting his head in order to think, peering ahead of him purposefully despite the knowledge that his wife and children miss him.

Around him the metallic, intersecting partitions form a deliberate web of gateways and blockages for the orderly positioned group of people who, like him, have come to blend the thoughts from their other lives (“my real life”, he thinks) with the visions and gestures that constitute this office. This man, who in these respects is no different from the others around him (although his name displays on several framed certificates of distinction, ordered in a rectangle near him) carries a significance – an awareness – that goes beyond him. And in this he suddenly has the potential to survive his own consciousness.

He ponders the possibility that the actions he performs will “reverberate in eternity” like those of Odysseus and Achilles whose brave energy influenced untold generations. All those that still silently strive to emulate them.

He has to admit that his actions will not be emulated because they are heroic, or even original. He concludes that he will be emulated because of an inevitability, that is to say, because he is aligned with the future. “This thought”, he reminisces, “may have been someone else's delusion of grandeur once. Now it is mine.” Certainly no one else noticed his new ownership. His gestures didn't change, nor did those of the people standing around in the corridor, or those of his neighbour in the same cubicle - a younger, more energetic man whom he has actively avoided lately.

But he has one last chance to ponder his immortality while his neighbour mumbles to him with a nervous grin. Then he loses his thought amidst the realisation that his selfish neighbour has connived the cunning move that will cost him his ambition and also the love of his wife.
Posted by thundercomb at 10:53 pm 2 comments: