I relate, with both excitement and reserve, my reading of Paul Virilio's The information bomb a short (but forceful) cultural commentary on “speed, politics, and information technology”. I say reading, but it's a bit like a nicotine headrush with more rewards.

Let me start with the end (because here we agree, and I am able to clarify using my own description):

The warfare of tomorrow – and here it will be comparable with the 'desk murders' of yesteryear – will not be so much an affair of desks as of laboratories – of laboratories with their doors flung wide to the radiant future of transgenic species, supposedly better adapted to the pollution of a small planet held in suspension in the ether of telecommunications - p. 145

This point is crucial, because it implies that every single one of us reading this post are not suited to the future of humanity Virilio is concerned about. At least not in our present form ...

But he identifies an essential point: given the interactive and electronic, digital nature of telecommunications and telepresence, our ability to participate in this network will become more important than our “physical” - that is to say, local – skill and ability. In my own view, our brains will probably become direct interfaces to the network, plugged in whichever way - and our bodies ... well, the site of simulated pleasures perhaps, and possibly a burden. Possibly, our network-linked consciousness and bodies, or bodily extensions, will be decoupled.

I am digressing, but this is essential to Virilio's concern that we have run up against the limits of time as we are entering “the era of the sudden industrialisation of the end, the all-out globalization of the havoc wreaked by progress in which subtly, gradually, we as individuals are the real site of a new war":

the very last 'fortress' is no longer the Europe of the EEC so much as the living human being – that isolated 'human planet', which has at all costs to be invaded or captured through the industrialization of living matter - p. 144

And as the site of this war, we will ultimately be surpassed as our mythical fantasy to survive our own techno-creations is driven by this dual catch-22 prong of desiring “progress” and “survival” at the same time. We have become victims of our own ideology:

the man without qualities, the primate of the new times, will have to disappear – just as the 'savage' had to disappear in the past to avoid cluttering up a small planet – and give way to the last model of humanity, the transhuman - p. 136

The “transgenic” mentioned earlier can now be seen as Virilio's identification of a eugenics with the purpose of eclipsing present humanity completely.

Virilio takes exactly a 100 pages to reach the point where he definitively announces his first main thesis, but the value of this delay lies in understanding the context of his thoughts. In particular, he reckons Francis Fukuyama was 'soft' in his announcement of the end of history.

He invokes Stefan Zweig as a spokesperson for the desire of an early 20th century youthful generation to overthrow the “responsible” attitudes of the old guard in favour of a culture that is always at play. In short the Father (culture) is bypassed for the game that is made possible through technology. Hence in the present “time”, when this goal is increasingly being achieved, youth is treasured over and above experience, and everybody seeks to remain young and playful even in advancing years – it's a form of eternal youth:

'No future' – the great hetacombs of industrial wars and revolutions finally answered the prayers of an entire younger generation, since they had the twofold merit of destroying its (moral, cultural, and social) past, and sparing it the shadow cast by a future seen as the irremediable coming of a hated old age - p. 98

But the perfection of this ideal, Virilio seems to imply, will take the future away from us. Not a real future (for time has already become diffused into an eternal now) but the point at which we will simply be replaced by the automatons more suitable to this state of play – which is ultimately a cybernetic space of constant feedback and control:

technologies would inevitably advance alone,leaving behind them a humanity without a future, assuming definitively pre-pubescent airs - p. 100

Virilio calls this ideal the Peter Pan ideal – “the stage of the child stubbornly determined to escape its own future” (p. 94). Unfortunately, technology will simply advance at the expense of this eternal infant.

But Virilio's main point may be political rather than cultural. The new warfare is identified as the replacement for the nuclear warfare of the Cold War. He relates localised radioactivity in the “old” warfare to information interactivity in the new warfare:

The 'information war' will soon be based, then, on global interactivity,  just as the war of atomic energy was based on local radioactivity - p. 141

with the interconnectedness of the Internet prefiguring the imminent launch of the cyberbomb - the future information superhighways ... [sic] We are faced, in other words, with a phenomenon which may possibly occur everywhere simultaneously - p. 134

And to emphasise the political dimension of the information bomb, Virilio identifies the US (who developed ARPANET and gradually improved its information arsenal and control over it) as the entity responsible for this warfare. In particular he mentions president Bill Clinton in relation to the chaos of cybercrime, “a chaos he himself has organized, together with his vice-president, prime mover of the future information superhighways” (p. 135).

I hope you found this brief introduction to Virilio useful (particularly in relation to The information bomb).
Posted by thundercomb at 9:56 pm No comments:

Cliche, cliche, i know - my goodness is there anything new under the sun?!

she slow-inhales her cigarette
waiting for the morning sun
to heat her hands - later her head.
she remembers when Rob sat there
in the rosewood chair,
his mysterious air and brown coat
all Sherlock Holmes and brooding flair.
that day their smoke
flowed thickly through,
like breathing hot Lyle's syrup.

the sunlight floods the room.

Jim takes off his shirt

she
lights
another
cigarette
Posted by thundercomb at 11:14 pm No comments:

The History of Advertising Trust

Stumbled across the History of Advertising Trust via a feature on BBC (popup warning).

This picture of kids wielding shovels that turn out to be ... giant toothbrushes! is in fact an ad for Royal Vinolia Toothpaste. 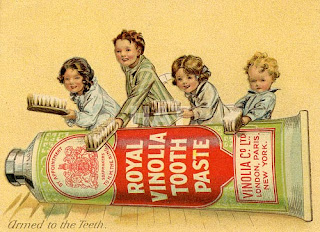 Posted by thundercomb at 11:03 pm No comments:

I am happy to announce (and rather surprised) that a story I recently submitted to the Secret Attic's monthly competition made it to the final 30 stories! In effect it is also included in their April booklet.

It's funny to look at your story again through the eyes of a certain credibility lent it by this type of feedback, trying to perceive the same quality that may have attracted the judges. I'm not sure whether my subsequent rereading was successful ...!

At any rate, rather than paying Secret Attic £4.70 for the booklet just to see my story, feel free to ask me for a copy (wink).
Posted by thundercomb at 9:36 pm No comments:

And enjoy the Diary of Dreams tune - Reign of Chaos!

Posted by thundercomb at 2:12 am No comments:

This clip plays to the intro of Diary of Dreams' Dead Letter - you should turn up the volume so you can hear the words. Hope you enjoy it as much as I did in making it!

On a quest I discovered vimeo, where users at least expect you to show authentic material. Unlike on where anything goes, including loads and loads of Real Rubbish (tm).

Some experimental video artists are sharing or linking their work from here - well worth checking out. One guy whose prolific output contains some catchy gems is Itin, also over at http://web.futureofthebook.org/itinplace/ - I particularly liked his Slaughter House Five Memorium
Posted by thundercomb at 10:38 pm No comments: